What Do The Numbers On My Breakers Mean?

If you open your main electrical panel, you’ll see labels on your breakers with different numbers. It could be a 15, a 20, or even up to a 60. Do you know what those numbers are for? If not, you aren’t alone.

In this post, we’ll tell you what they mean and why they’re important. Then we’ll go over what your breakers are for. Because unlike a lot of people think, they aren’t there to protect you. 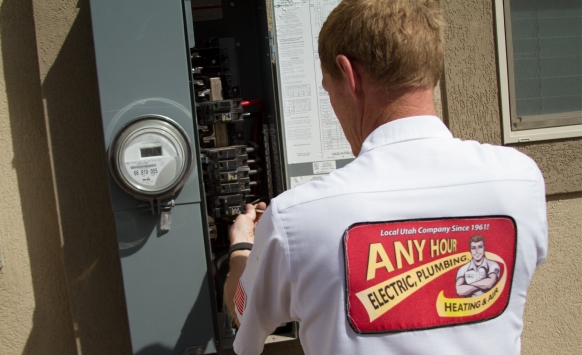 What do the Numbers Mean?

The numbers on your breaker are there to tell you much power they let through the circuit before it trips. Electricians measure that power in amps. So, a breaker labeled with a 15 will let 15 amps through but will shut the circuit off if it senses 16 amps.

Your breakers work like this as a safety measure. But instead of protecting you, it’s meant to protect the wiring in your walls. A bigger wire can handle more power running through it than a smaller one. So your breakers cut the power to the circuit if they sense more power than the wire should hold.

What Happens if the Ratings Don’t Match?

If a circuit is pushing more power through a wire than it’s rated for, that wire can start to heat up. If it heats up enough, it’ll start to degrade. That can cause shorts, wires fusing together, or even a fire.

Your breakers are there to stop that from happening. They shut the circuit down if they sense too much power to prevent the wires from overheating. If a breaker allows an amperage that's too high, it won’t trip when it should. That can mean a fire hazard that you don’t even know about.

Is It A Bad Thing When My Breaker Trips?

The breaker tripping is often a good thing because it’s doing its job to warn you of something else. And if you know what’s causing the problem, you can address it. For example, modern kitchens use a lot more electricity than they used to. But an older home may be running your microwave on the same circuit as the plug for your blender. If you try to run them at the same time, you might trip the breaker. Now you know to run one appliance at a time.

The real problems come up if you don’t know why the breaker is tripping or if it stops tripping when it used to. If your breakers aren’t tripping when they should, they aren’t protecting your wires. Those wires will continue to heat until something melts or burns. And if the breaker trips again right after you reset it, then it’s still sensing too much power. That could mean a short circuit hiding in your walls.

What Do I Do If My Breaker Keeps Tripping?

The first thing is to check how many things you’re running on one circuit at the same time. That way you can figure out if that circuit is trying to power more things than it should. If it is, you can adjust where you plug things in or stagger when you run appliances. You can even have an electrician add new circuits to your system if you need. If you can’t find a cause, you should call an electrician you trust to inspect your breaker panel.

One thing you shouldn’t do is switch out a breaker for one with a higher rating. Doing that means your breaker won’t trip when it should. That can cause your wires to overheat and risk a fire. If someone did this in the past, you may notice your breaker panel is warmer than room temperature. You should call an electrician to check it out as soon as you can.

If you’re having issues with your breakers, Any Hour Services would be happy to help. We have licensed electricians that can work with you to figure out your situation. You can give us a call or schedule an appointment online