The 3 Stages of Sewer Main Failure

It’s never fun to have sewer line issues. But not all issues are the same. Some are small and are easier to fix. Others are far more complex and serious. So that you have an idea of what to expect if your main lines are backing up, we’re going over those differences today.

We break mainline damage down into 3 stages at Any Hour Services. Each one is more serious than the one before it. Stage 1 is the least severe, and Stage 3 is the worst. And once your pipes reach stage 1, stages 2 and 3 are coming unless they get fixed. 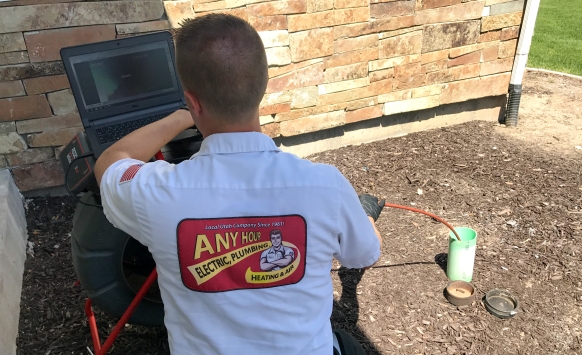 Stage 1 covers the beginning of mainline damage and is the easiest stage to repair. At this stage, you should have only dealt with one or two backups. Your pipes might have small cracks or joints out of alignment by less than an inch. But your pipes run straight from your house to the street and don’t have any low spots slowing water flow.

Any trenchless repair will do the job here. The most common option is adding a resin liner to the inside of your pipes. It’s inexpensive compared to other repairs and needs the least amount of digging. Depending on your situation, you might choose to go with a pipe burst instead. A description of that process is in the next stage.

Once you've experienced a few backups, you've probably entered stage 2. Now the cracks are getting bigger and roots are starting to find the leaking water. Or your pipes might have shifted by more than an inch. Your pipes might have a few low spots collecting water and waste, but there haven’t been any full cave-ins yet.

Most stage 2 situations can still use any trenchless option. You might have to combine it with a small digging operation to repair a low spot, however. A common solution here is a pipe burst. A team would pull a new, wider pipe through the old one, bursting the walls and replacing the line. You get a solid line with minimal damage to your yard.

By this point, you’ve reached total mainline failure. You're likely dealing with multiple backups a year now. Or even worse, your home could have gone completely out of service.

Your pipes might have caved in or roots might have filled entire sections. There might be places with deep low spots, known as bellies. They would be collecting a large amount of water and waste. That buildup would slow or stop the flow of water completely.

At stage 3 there are no trenchless options. Excavation is your only choice now. A team would dig a trench and replace the entire line with a new one.

We hope that gives you an idea of what you can expect from a damaged main sewer line. If you want a professional opinion on your specific situation, Any Hour is happy to help. Our certified drain technicians can take a look at your lines and work with you to find the best solution. You can book online or give us a call to schedule an appointment.