The 1960s home consumed much less electricity than homes built nowadays. Because central air wasn’t invented until the 1970s and we didn’t yet have appliances like microwaves or other fixtures with complicated circuitry, the standard American home used far less power.

In fact, according to the US Energy Information Administration, residential electrical energy usage rose by 3% nationwide each year from 1960 to 2010. And, with rising annual summer temperatures, homeowners are using air conditioners more frequently and for longer hours. Here in the Salt Lake City area, the average home is 60 years old. What this means is that, as power demands increase, breaker panels in older homes might be experiencing greater strain. 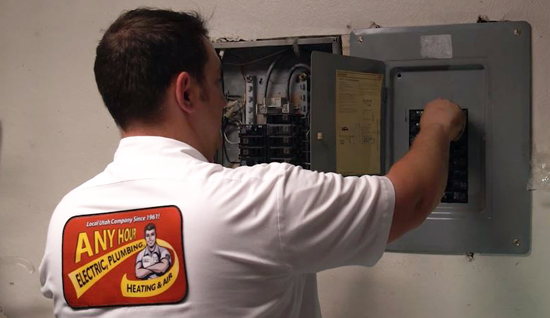 Breaker panels, sometimes called the fuse box, is where all of the wires in the house go to the outlets in each room. If you have an electrical issue, this is generally the first place to look because it’s where all the fuses are. This is especially true if you’ve had what’s called a tripped breaker or a blown fuse.

1.  WHAT HAPPENS WHEN A BREAKER TRIPS?

Most people think the breaker is there to protect them when, in actuality, the breaker is there to protect the wires in the wall. If you go to the panel, on most of the breakers you’ll notice a number from 15, 20, 30, 40, up to 60. You’ll see some of them are tied together: that two switches are connected to each other. The number on the breaker switch tells you how much power is allowed to go through that wire. If you look at the wires in your wall, they are all different sizes. The larger the wire, the more electricity it can handle.

If you’re overloading the circuits easily and tripping the breakers, it means you need to run more circuits to handle the load. Tripping breakers mean you’re trying to pull too much electricity on that line. Below is a chart showing how much amperage should go over a certain wire.

2.  SHOULD I BE WORRIED IF A BREAKER TRIPS?

Electrical heaters and AC units pull a lot of power. Breakers can trip if you’re running one of these as well as another appliance like the vacuum or microwave. But a tripping breaker is actually a good sign. It’s a signal from your panel to you that the load on that circuit is too high and that something needs to change. It’s your home’s way of telling you it’s too much and that the breaker is working as it should.

On the other hand, if you have a breaker that is tripping constantly, it wouldn’t be a bad idea to have an electrician come out and inspect your breakers to make sure they’re functioning properly and not wearing out. Just like any other mechanical device, breakers can wear out and age over time. If you’re flipping it all the time, it will wear out faster. You may need to run a new circuit and an electrician can help.

3.  WHAT IF MY BREAKERS TRIP FOR SEEMINGLY NO REASON?

Let’s talk about why breakers trip and maybe this will help you identify a problem:

But it is dangerous if you’ve got a tripping breaker and you don’t know why. Have an electrician come, check out your circuits, and troubleshoot to find the problem. The last thing you want is to have a persistent problem that causes bigger issues, like a fire.

4.  WHAT IF I FLIP THE BREAKER AND IT IMMEDIATELY TRIPS AGAIN?

If you go to the breaker panel and try to turn the breaker back on but it immediately trips again, this could be an indication of a direct short in the outlet that you have an appliance or fixture plugged into. This could either melt the outlet or cause overheating. So if the breaker continually trips and won’t stay on, this is a sign you’ve got something major going on and you should get it checked out immediately.

5.  WHAT IF THE LIGHTS AND APPLIANCES GO OUT IN A ROOM BUT NONE OF THE BREAKERS HAVE TRIPPED?

Some panels are so old and/or unsafe that the breakers actually don’t trip. If you have breakers that trip frequently and you know why they’re tripping, this is actually a good sign: your panel is doing its job. However, if your lights are going out but the breaker isn’t doing its job, you should have your electrical system inspected by a licensed electrician immediately.

One of the first things you can do is check and make sure your home has a panel that is still rated safe. In older homes, some panels are outdated and discontinued. Especially in the case of the Zinsco and Federal Pacific panels, they pose a significant fire risk to your home and should be replaced immediately.

6.  WHAT IF I FLIP THE BREAKER AND IT IMMEDIATELY TRIPS AGAIN?

You should never just go in and upsize a fuse or breaker. Doing this may solve the annoyance of a tripping breaker but what a larger fuse would do is allow more electricity to flow through the line. Allowing more electricity onto a line that isn’t rated to handle such a big load can cause the wires to heat up. This could lead to melted circuits and electrical fire.

The perfect scenario is that you would run new wire and install a new circuit. This is especially important if you’re going to start a home project or you’re looking to run new appliances that will require more load on any of your circuits. Check the breaker size first and it might be necessary to run a larger gauge wire to handle the amps. Additionally, exercise extreme caution when using extension cords, especially when using them to power something that requires high wattage, like an electric heater or portable AC unit.

Call a licensed electrician if this is something you don’t feel comfortable taking on. Electrical work can be intimidating and even dangerous if you aren’t familiar with how everything works. An electrician can safely pull off face plates, circuits, look behind outlets, etc. They will test all of your circuits to find the root of the problem. They can also test circuit breakers to make sure they’re all working properly and protecting the wires like they should. They can identify load problems and help you feel safe, knowing your home’s circuits are being protected as they should.